At least 30 people have died and 20 more have been hospitalized in the last two weeks in Istanbul after consuming bootleg alcohol.

The victims, most of the citizens of Turkmenistan living in Istanbul, rubbed the toxic substance on their bodies before consuming it in an attempt to protect themselves against the coronavirus, according to the police sources.

Two people were arrested on the Ionian island of Zakynthos on Monday in connection with balloons containing nitrous oxide, more commonly known as laughing gas, and adultarated drinks, inside two one-day cruise ships docked at the port.

More than a third of Greek motorists drive while under the influence of alcohol, significantly above the European Union average, according to the Hellenic Society of Forensic Medicine.

Specifically, according to European Commission data, 35 percent of Greeks admit to driving after drinking alcohol, 10 percent more than the EU average of 25 percent.

According to the Independent Authority for Public Revenue (IAPR), the canisters containing the gas also known as "hippy crack" - as well as balloons containing N2O - were found in a warehouse owned by an alcoholic drinks trader.

Turkish police seized around 80 kilograms (some 176 pounds) of cocaine in an Istanbul port, officials said on Feb. 14. 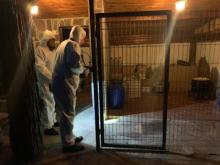 Laboratory for Synthetic Drug was discovered in Radomir, the Ministry of Interior announced.

The police operation was held on February 5th. by officers of the Directorate General Directorate for Combating Organized Crime, ODMWP-Pernik and RU-Radomir, under the supervision and management of the Pernik Regional Prosecutor's Office.

Bulgartabac factory in Blagoevgrad stops working, but there is still no clear position on whether it is temporary or not. From more than 2,000 employees years ago, currently the factory employs about 200 people. A few days ago they were told that they had to submit notices of termination on the grounds that there was not enough work, reports BNT.

Greek authorities say they have seized 6.5 tons of cannabis and a large quantity of pills containing the banned stimulant Fenethylline hidden in a tug boat on the south coast of the island of Crete.

Greek authorities have broken a drugs ring importing narcotics into the country as dehydrated 'superfood' berries implanted with cocaine, police said on Wednesday.

Police in Athens said they had confiscated 36 kg (79 lb) of acai berries, which could have as much as 18 kg (39 lb) of cocaine extracted from them in a rehydration process.