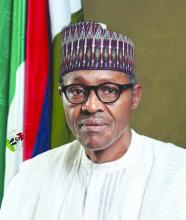 Nigeria's President Muhammadu Buhari has denied claims that he died and was replaced by a clone, calling the speculation "ignorant rumors.", reports CNN.

Nigerian President Muhammadu Buhari on Sunday quashed a rumour stemming from his ill health that he had died and been replaced by a lookalike impostor from Sudan, his spokesman said.

Nigeria's President Muhammadu Buhari on May 29 said he would approve a new law to reduce the age limit for political office, raising the prospect of younger candidates at next year's general election.

At least 45 people were killed after armed bandits attacked a village in northern Nigeria, officials said Sunday, the latest in a series of attacks in the country's rural areas.

Fighting between militiamen and the bandits erupted after the raid on the village of Gwaska, in northwestern Kaduna state, on Saturday, according to Agence France-Press.

More than 200 Nigerian migrants stranded in Libya have been returned to their home country, Nigerian officials said, reported CNN.

Turkish President Recep Tayyip Erdo?an has said Turkey is ready to help Nigeria in its fight against terrorism.

Addressing a joint press conference alongside his Nigerian counterpart Muhammadu Buhari at the State House in the Nigerian capital Abuja on March 2, Erdo?an said Turkey will help Nigeria bring peace in the region.

Three decades after he first came to power in a military coup, Muhammadu Buhari will be sworn in on May 29 as elected President of Nigeria, giving him control of an African giant struggling with slowing economic growth and a raging Islamist insurgency.

Nigeria?s president-elect Muhammadu Buhari cautioned April 14 that he could not make promises on the return of 219 schoolgirls kidnapped by Boko Haram exactly a year ago.

?We do not know if the Chibok girls can be rescued. Their whereabouts remain unknown. As much as I wish to, I cannot promise that we can find them,? he said in a statement.