US linguist Noam Chomsky believes that the US military strategy under US President Donald Trump is moving toward world destruction.

Liberal scholar and progressive icon Noam Chomsky has some harsh words for the violent alt-left group Antifa and the mainstream Democrats who support them.

“As for Antifa, it’s a minuscule fringe of the Left, just as its predecessors were,” Chomsky told the Washington Examiner on Thursday. “It’s a major gift to the Right, including the militant Right, who are exuberant.”

Yet again, the Teachers Federation of Greece stands firm against any attempts to even think about evaluating its members, let alone allow it to actually happen. And they are not the only ones who are fervently fighting to prevent this from happening.

The surge in right-wing and anti-establishment sentiments due to of failed neo-liberal policies in Europe is likely to lead to EU's collapse, says Noam Chomsky.

Yesterday morning, when I sat down to write this piece, a dozen academics in the province of Kocaeli were detained by the police. Moreover, news sites were noting, "more arrests are coming." Yet another wave of a Turkish witch hunt, in other words, had begun.

Erdogan said Chomsky, who along with 1,128 Turkish and foreign academics from 89 universities signed an open letter protesting against Turkey's attacks on Kurdish areas, as being "in the dark" and displaying "colonialist mentality."

Academics and intellectuals who publicly called on the Turkish government to end security operations in southeastern Anatolia and return to the table for talks to resolve the Kurdish issue are the "conscience of the country," a co-chair of the Peoples' Democratic Party (HDP) has said. 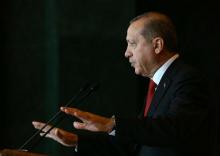 President Recep Tayyip Erdo?an has strongly reacted to a petition signed by more than 1,000 local and international academics calling on the Turkish government to end the security operations being committed in southeastern Anatolia and to return to table for talks to resolve the Kurdish issue, describing the signatories as "ignorant." After an urgent meeting on Jan.

The American left-wing philosopher and activist Noam Chomsky has said that the European Union's reaction to the new Greek government's bid to roll back austerity policies in the debt-hit country was ?extremely savage,? while warning of a far-right backlash.

?The reaction to SYRIZA was extremely savage,? Chomsky said in an interview with Democracy Now! on Tuesday.