The authorities deployed special police units on Monday morning in Serb-majority northern Kosovo after hundreds of Serbs blocked roads near the Jarinje border crossing point and in the municipality of Zubin Potok in protest at the government's decision to make them use Kosovo vehicle licence plates instead of Serbian ones.

Kosovo police have detained three people over an attack on a young Kosovo Serb in the northern part of the ethnically-divided town of Mitrovica on Tuesday morning.

Police said that one of the suspects who was arrested, identified only by the initials E.A., is a Kosovo Albanian who is on the wanted list to serve a prison sentence, news website KosSev reported.

Belgrade Higher Court has dismissed a defamation case launched by controversial Kosovo Serb businessman and politician Milan Radoicic against rival Kosovo Serb politician Rada Trajkovic, who accused him of being implicated in the shooting of Oliver Ivanovic in 2018. 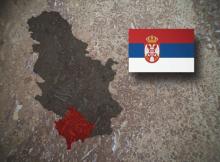 This proves once again that Britain cannot resist straining its neocolonial muscles, reports Kosovo Online, reported by Keith Clarenberg, an investigative journalist who investigates the role of intelligence services in shaping policy and perception.

Members of the assembly of Srpska Lista, the Belgrade-backed Kosovo Serb party, on Tuesday re-elected Goran Rakic as president and Milan Radoicic as a party vice-president by unanimous decision. The assembly also elected Igor Simic and Dalibor Jevtic as vice-presidents.

Since the Kosovo-Serbia dialogue was resumed in the wake of Kurti taking office as Kosovo's premier earlier this year, there have been no improvements in relations and been little or no progress in implementing agreements already made over the past decade of negotiations.

According to him, the change of the Kosovo constitution is very possible in order to solve the issue of forming the Community of Serbian Municipalities.

The President of Serbia said that today is not an easy task before us and that it is not the time for excessive expectations or expectations that are not in line with the reality around us.
"We will have to continue to address it responsibly with a strategic view of the future and awareness of how we want to leave the country to our descendants," he said.