After the Turkish ambassador to Skopje, Hasan Mehmet Sekizkok, on Wednesday said that his country wants 86 alleged "Gulenists" deported from North Macedonia, 20 of whom it wants to be extradited to Turkey, authorities in Skopje responded that they are working on it.

The mayor of Skopje's municipality of Centar, Sasa Bogdanovic, said on Monday that a large unfinished memorial complex dedicated to Skopje-born Mother Teresa should not be completed but erased from the city's urban plan because it blocks an important pedestrian street leading to the main square.

Who would have imagined that certain people here in Athens would reach the point of being glad that Bulgaria is "playing tough" and is blocking the start of North Macedonia's accession talks, so as to wreak vengeance for the treacherous Prespa Agreement that "gave it all away" to our northern neighbours.

Brnabic will speak at the high-level plenary session, which starts at 12 o'clock, the government's Office for Cooperation with the Media announced. The topics of the panel are preserving and reviving the European perspective of the region, successes and challenges in the Western Balkans, as well as joint work on managing the future.

Main opposition SYRIZA leader and former PM Alexis Tsipras while on a visit to Northern Macedonia today declared that implementation of the Prespa Agreement that he and Northern Macedonia's Prime Minister Zoran Zaev signed (June, 2018) is the best answer to the enemies of the accord and the key to the future.

Thousands of people attended the Pride parade in North Macedonia's capital on Saturday, which started at noon in the park in front of the national assembly in the centre of Skopje.

Livening up the otherwise sun-drenched and almost deserted city streets, the parade's participants and supporters strolled through the city centre and gathered in Skopje's main park. 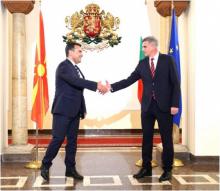 Bulgaria was forced to postpone its support for the start of negotiations for EU membership of the Republic of North Macedonia at the General Affairs Council meeting held on June 22, 2021.

The announcement was made by Interior Minister Oliver Spasovski

Bulgarian President Rumen Radev said here on Thursday that North Macedonia's faster progress to the EU depends only on dialogue
with Bulgaria.