Turkish Defense Minister Hulusi Akar has said Turkey has neutralized a total of 2,577 elements and soldiers of the Syrian regime in the northwestern Idlib province as part of its newly launched "Operation Spring Shield."

Turkish President Recep Tayyip Erdogan will visit Russia on Thursday for a one-day trip, the Turkish presidency said on Monday, amid tensions between Ankara and Moscow over escalating clashes with Syrian government forces in Syria's northwestern Idlib region.

His visit comes in time of heightened tensions between Ankara and Moscow over escalating clashes with Syrian government forces in northwestern Idlib region, the Turkish presidency said today.

The United States will dispatch two senior diplomats for talks with Turkish officials and to pay a visit to the Turkish southern provinces of Hatay and Gaziantep on the Syrian border amid the ongoing conflict between Turkey and the Syrian regime over Idlib province.

Turkey shot down two Syrian warplanes over Idlib on March 1 and struck a military airport well beyond its frontlines in a sharp escalation of its military operations following the death of dozens of Turkish soldiers last week.

Funerals were held across Turkey for the soldiers killed during a deadly attack in Idlib, a de-escalation zone in northwestern Syria, just across Turkey's southern border.

The funerals which started on Feb. 29 in many Turkish provinces also continued on March 1 in Samsun, Yozgat and Kütahya provinces, as well as in the capital city of Ankara.

Defense Minister Hulusi Akar, Chief of General Staff Gen. Yaşar Güler and commanders of Turkish Land and Air Forces monitored latest developments along the border, according to an Anadolu Agency correspondent at the scene. 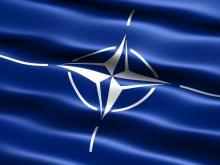 He stressed that the Alliance supports Turkey.

President Recep Tayyip Erdoğan and Russian President Vladimir Putin exchanged a phone call on February 28 and agreed to meet in-person very soon and to discuss new measures to de-escalate tension in the Idlib province of Syria as the Syrian regime killed 33 Turkish troops in an attack.

The deadly attack on Turkish troops took place although the location of our forces was known by Russia, Turkey's defense minister said on Feb. 28.

"This attack occurred even though the locations of our troops had been coordinated with Russian officials in the field," Defense Minister Hulusi Akar told reporters in Hatay, a southern Turkish province bordering Syria.