Turkey will no longer stop Syrian refugees from reaching Europe, a senior Turkish official said, as Ankara responded on Feb. 29 to the killing of 33 Turkish soldiers in an airstrike by Syrian government forces in Syria's northwestern Idlib region.

UN Secretary-General Antonio Guterres on Feb. 27 reiterated his call for an "immediate ceasefire" in northwestern Syria following a deadly airstrike by Syrian regime forces on Turkish troops in Idlib province. 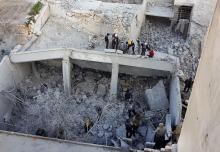 Shelling and airstrikes by Syrian regime forces killed at least three people on Feb. 26 in northwestern Syria, where dozens of villages, including major rebel strongholds in the last opposition-held area, have been captured over the past few days.

Syrian regime forces recaptured the symbolic town of Kafranbel in Idlib province, one of the first cities to rebel against the Damascus regime, the Syrian Observatory for Human Rights reported.

U.S. Secretary of State Mike Pompeo said on Feb. 25 the Syrian regime will not be able to achieve a military victory and the recent offensive in Idlib only heightens the risks of conflict with Turkey.

Turkey's Defense Ministry announced on Feb. 20 that two Turkish soldiers were killed and five more were wounded in an air strike in the northwestern Syrian province of Idlib.

Turkey's presidential spokesman said on Feb. 18 that Ankara's policy in Idlib, the restive Syrian province, is based on the 2018 Sochi deal reached with Russia.

"Returning to the Sochi deal is the baseline of Turkey's policy for Idlib," Kalın told reporters in the capital Ankara, as meetings concluded between Turkish-Russian delegations on Idlib in Moscow.

Turkey will use force against rebel groups violating a ceasefire in Syria's northwest Idlib region, Turkish Defense Minister Hulusi Akar said on Thursday, in an apparent response to Russian criticism.