Novak was free in the first round, starting participation in the Masters in Italy on Tuesday.
Djokovic had two and a half weeks of rest, since he did not play at the Masters in Madrid after the ATP category 250 tournament in Belgrade.
His opponent is the 31st tennis player in the world, Taylor Fritz, with whom he has met three times so far. 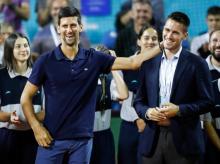 He says that it is a great honor to return a tournament of this type to Belgrade. 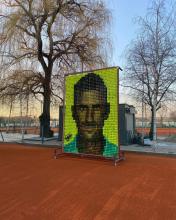 Novak Djokovic says it has taken "a lot of blood, sweat and tears" to break Roger Federer's record of 310 weeks ranked as world number one.

The 33-year-old Serb set the record on Monday for most weeks at number one in the 48-year history of the ATP rankings.

Belgrade on Monday celebrated the historic success of Serbian tennis star Novak Djokovic, when he will have been at the top of the Association of Tennis Professionals list for the longest time ever.

Novak Djokovic equaled Roger Federer's record with 310 weeks at the top of the ATP list.
In seven days, more precisely on March 8, Djokovic will officially exceed Roger Federer and take over his record, which he held for many years.

Due to the fact that he defended the title, he remained at the same number of points, 12.030, and his advantage over second-placed Rafael Nadal is now 2.180 points.
Djokovic is getting closer to breaking Roger Federer's record of 310 weeks at the top of the ATP list, and that will officially happen on the list that will be published on March 8.

For the ninth time in his career and the third time in a row, in the grand final, the Serb defeated the fourth seed, the Russian Danilo Medvedev, with 114: 5, 6: 2, 6: 2, after 114 minutes of the game.
It was the 18th Grand Slam trophy for the first player in the world who is expected to break Roger Federer's record for the number of weeks at the top of the ATP list on March 8.

Daniil Medvedev has another opportunity to land a first Grand Slam title after beating Stefanos Tsitsipas to reach the Australian Open final.

The in-form Russian won 6-4 6-2 7-5 against Greek fifth seed Tsitsipas, securing his 20th victory in a row.

The defending champion of the tournament in Melbourne defeated the 114th player in the world, Russian Aslan Karatsev, 6: 3, 6: 4, 6: 2, without major problems after 113 minutes of the game.
It was the 20th consecutive victory of the World No. 1 at the tournament in Melbourne Park, which brought him a place in the 28th Grand Slam final in his career.