The U.S. and South Korean militaries launched eight ballistic missiles into the sea Monday in a show of force matching a North Korean missile display a day earlier that extended a provocative streak in weapons demonstrations.

North Korea test-fired a barrage of short-range ballistic missiles from multiple locations toward the sea on Sunday, South Korea's military said, extending a provocative streak in weapons demonstrations this year that U.S. and South Korean officials say may culminate with a nuclear test explosion.

China and Russia have vetoed a US attempt to impose new UN sanctions on North Korea over its renewed ballistic missile launches, publicly splitting the organization's Security Council for the first time since the body began imposing sanctions on Pyongyang in 2006, Reuters reported.

The launch of the North Korean rocket comes a day after U.S. President Joseph Biden completed his Asian tour during which he visited Seoul and Tokyo, according to Reuters.
This is the 17th ballistic test that North Korea has performed since the beginning of the year.
Earlier this month, Pyongyang launched an intercontinental ballistic missile from a submarine.

North Korea fired a submarine-launched ballistic missile on May 7, Seoul said, its second missile launch in three days after the United States warned Pyongyang could be preparing for a nuclear test.

North Korea has launched a ballistic missile toward its eastern waters on Wednesday, South Korean and Japanese officials said, days after North Korean leader Kim Jong Un vowed to bolster his nuclear arsenal "at the fastest possible pace" and threatened to use them against rivals.

China's UN ambassador on Feb. 4 called on the United States to be more flexible in its dealings with North Korea, as Beijing joined others to scrap a US-drafted Security Council joint statement condemning Pyongyang's missile launches, diplomats said. 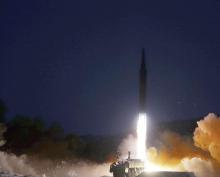 North Korea confirmed Monday it test-launched an intermediate-range ballistic missile capable of reaching the U.S. territory of Guam, the North's most significant weapon launch in years, as Washington plans steps to show its commitment to its Asian allies.