Reuters quoted Sheik Ahmed Abu Risha, leader of a pro-Iraqi government paramilitary force in western Iraq, as saying Sunday's air strikes were very accurate and there was no collateral damage.

U.S. President Barack Obama has announced he will unveil a strategy to defeat Islamic State as the U.S. expanded its air campaign against the jihadists, and Arab states vowed to take all "necessary measures" to confront the threat.

The United States said it launched four air strikes against Islamic State militants threatening the Haditha Dam in western Iraq on Sept. 7, broadening its campaign against the fighters.

It was Washington's first offensive into Iraq's western Anbar province since it started air strikes on Islamic State forces in the north of the country in August.

The US are putting together a coalition to counter Islamic State militants in Iraq but no ground troops will be committed, US Secretary of State John Kerry said on Friday.

The United States plans to fight Islamic State of Syrian and the Levant (ISIL) until it is no longer a force in the Middle East and will seek justice for the killing of American journalist Steven Sotloff, President Barack Obama said on Sept. 3.

President Barack Obama has ordered an increase of about 350 troops in Baghdad to protect the U.S. Embassy in the Iraqi capital and is sending top officials to the Middle East to "build a stronger regional partnership" against Islamic State in Syria and the Levant (ISIL) militants, the White House said on Sept. 2.

An interview of Novinite.com with Mohamed Khalaf, an Iraqi-born journalist and correspondent in Bulgaria of a Kuwaiti newspaper, on the Sunni militant group called Islamic State (IS) acting in Iraq and Syria. 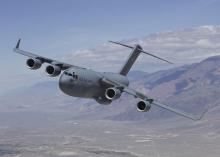 A source in Albania's Ministry of Defence, who spoke on condition of anonymity, told BIRN that weapons transfer had begun following a government decision earlier this month.

At least one C-17 US Air Force transport plane, commonly used for the transfer of weapons and ammunition, was seen leaving Tirana’s Mother Teresa Airport on Sunday.

Iraqi warplanes have begun targeting jihadists besieging the Shiite Turkmen town of Amerli amid growing fears for the safety of thousands of residents short of food and water and facing a "massacre".

The sophistication, wealth and military might of Islamic State of Syria and the Levant (ISIL) militants represent a major threat to the United States that may surpass that once posed by al-Qaeda, U.S. military leaders said on Aug. 21.