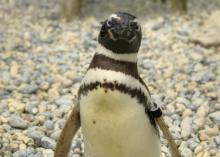 The oldest Magellanic penguin at the San Francisco Zoo & Gardens, one of the oldest penguins living under human care anywhere in the world, died on June 6 at the age of 40, the zoo reported.

The estimated age of the male, called Captain Eo, was well over the species' average life expectancy of 20 to 30 years, the zoo said in a statement. 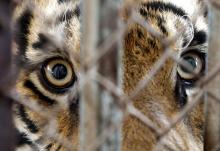 News about an unusual ferry passenger - a Bengal tiger - on a ferry connecting the Croatian island of Hvar and the coastal city of Split has made headlines but also drawn concern among animal rights groups.

The İzmir Natural Life Park has announced the arrival of a new baby animal whose species is at risk in its respective natural habitat: A healthy Asian elephant.

No name has been given to the baby elephant yet.

A new-born fawn, which was abandoned at the Istanbul zoo, has found a new mother in a goat that gave birth on the same day.

Known as Turkey's oldest turtle, Tuki, which lives in the Faruk Yalçın Zoo in the northwestern province of Kocaeli's Darıca district, has turned 99.

A chimpanzee named "Can," born in Gaziantep Zoo and later refused by his mother, has been receiving "special family therapy."

Toucan, meerkat and Lemur are the new inhabitants of the Sofia Zoo.

The exotic animals are born in the year when the oldest zoo on the Balkan Peninsula celebrates its 130th birthday.

Various measures are being taken to prevent animals from being affected by the extreme heat in the southern province of Antalya. The residents of the Antalya Municipality Zoo cool off with iced meat and fruit offered by their caretakers. This photo shows the zoo's monkeys eating iced fruits in their enclosure.

BBC - Two lions, two tigers and a jaguar have escaped from a zoo in Lünebach in western Germany, police have said.

Local authorities advised residents to stay inside their homes and call police if they see anything. A massive hunt is under way for the five big cats.

A bear had also escaped from the privately owned Eifel zoo, but was shot dead, a local official told AFP.

A dog was saved on Sept. 19 by fire authorities and zoo personnel after two unidentified perpetrators put a belt around its neck, dragged it and threw it from a height of 20 meters in the southeastern province of Gaziantep.