Pablo Picasso’s Guernica showed the suffering of the Spanish civil war in 1937. It was the artist’s response to the bombing of Guernica, a Basque Country village in northern Spain, that was bombarded by German and Italian planes at the request of Spanish Nationalists.

Bulgarian President Rosen Plevneliev unveiled an exhibition of works of art by Pablo Picasso at the National Art Gallery in Sofia on Thursday.

The exhibition entitled "Picasso: the eternal quest" features more than 70 original works of art, which have been specially selected from the Birthplace Museum of the Spanish painter in Malaga.

Christie's has a lineup of 20th-century masterpieces by Lucian Freud, Amedeo Modigliani, Pablo Picasso and Roy Lichtenstein that will come to auction this fall Works by some of the most coveted artists of impressionist and modern art are coming to auction this fall, including two major works by Paul Gauguin.

The southern province of Antalya has a new culture center, recently opened with two exhibitions by two masters, Picasso and Ara Güler The former Antalya Trade and Industrial Chamber (ATSO) building in the center of the southern city has been turned into a culture center. The opening of the Antalya Culture and Arts Center (AKS) was made with original paintings by Picasso on Sept.

The U.S. government on Aug. 13 formally returned a painting by Pablo Picasso valued at $15 million that had been stolen from a Paris museum more than a decade ago and seized by immigration officials late last year in New Jersey.

A painting by Pablo Picasso and a sculpture by Alberto Giacometti are the two priciest piecs of painting and sculpting ever sold at an auction. 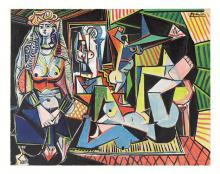 Christie's auction house is hoping to set new world records with a Picasso valued at $140 million and a Giacometti worth $130 million, as New York's spring auction season kicks off May 5.

Pablo Picasso's colorful "The Women of Algiers (Version 0)," depicting a scene from a harem, will be up for grabs when Christie's puts it on the auction block May 11.

An exhibition of more than 50 works of the Spanish art genius Pablo Picasso opened on Thursday at the National Museum in the country's old royal capital, Cetinje.

The event has been hailed as one of the most important on the Montenegrin art scene in a long time.

BELGRADE - An exhibition entitled Art Tour, which is made up of highest quality reproductions of the masterpieces included in the collection of the National Museum in Belgrade, will be opened at Nikola Tesla Airport on March 27.

A French court on March 20 handed down a two-year suspended sentence to a former electrician and his wife, who hid 271 Picasso works in their garage for close to 40 years.

The court in the French Riviera town of Grasse found Pierre and Danielle Le Guennec guilty of possessing stolen goods, after a trial that made headlines in France and abroad.