Greek Cyprus' supreme court on May 29 upheld an order to extradite a suspected Hezbollah member to the U.S. on money laundering charges, official media said.

A five-judge bench unanimously dismissed an appeal against a decision by a lower court in September 2019 to extradite the man, identified only by his surname Diab, the Greek Cyprus News Agency said.

California Governor Gavin Newsom has denied a parole request by Hampig Sassounian, an Armenian who assassinated a Turkish diplomat in Los Angeles in 1982.

The announcement came on May 25 with Newsom reversing the Board of Parole Hearings' decision which found Sassounian suitable for parole.

Some also noted that this controversial issue might have been deliberately politicised and used to fuel party campaigns ahead of elections that will be taking place across the region in the coming months. Croatia and Serbia are to hold general elections at the end of June while Bosnia is scheduled to have local elections in October.

Patrick Devedjian, a former French government minister and a lawyer of the ASALA terrorist organization, has died from COVID-19.

Devedjian on March 26 announced that he was diagnosed with the novel coronavirus.

He said that he'd been affected by the epidemic and was able to testify to the exceptional work of the medical staff.

A governor in Somalia's Puntland has been killed in a suicide bombing claimed by the Al-Shabaab jihadist group, AFP reported on March 30.

Abdisalan Hassan Hersi, governor of Nugaal region, succumbed to his injuries after being rushed to hospital in Garowe, the capital of Puntland where the blast occurred on March 29. 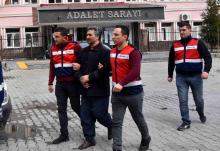 A convicted terrorist who was in hiding for over 20 years was arrested in the city of Muş, southeastern Turkey on March 25, state-run Anadolu Agency reported.

In 2000, the man, identified by the initials Y.Y., was convicted of "being a member of the Hezbollah terrorist organization" and sentenced in absentia to six years and three months in prison.

A heavily fortified compound in Somalia's capital Mogadishu was attacked by al Shabaab militants on March 18, local media reported.
Local broadcaster Dalsan Radio said mortar shells were fired at the Halane compound, which houses U.N., EU, and African Union facilities, as well as embassies of countries including the U.S. and U.K.