The quarantined deputies will participate in the activities of the National Assembly remotely. The proposal of a group of representatives from "We Continue the Change" was adopted by 155 votes in favor. 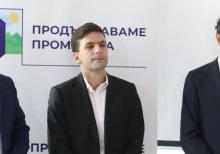 In North Macedonia's parliament on Monday, MP Kastriot Rexhepi said his absence from last Thursday's session, which aborted a planned vote of no confidence in the government had been his own decision. He had not been "kidnapped", as frustrated opposition lawmakers suggested. He had simply wanted to avoid unwarranted publicity.

After an opposition attempt to oust the government of Zoran Zaev failed on Thursday in North Macedonia's parliament, the main ruling Social Democrats, in another twist, said they now expect their wafer-thin majority to be boosted by more MPs.

Ljubljana – The National Assembly appointed Rok Svetlič a judge on the Constitutional Court for a nine-year term in a secret ballot on Wednesday. Svetlič received 46 votes, the minimum required to get appointed, after only 46 MPs in the 90-strong legislature picked up their ballots and all voted for him. The new judge has already been sworn in.

Bulgarians will vote on November 14 for a new president and parliament. BIRN takes a look at the main contenders for the post of president.

At the presentation of the draft law, Abazovic said Montenegrin society was ready for such an "anti-mafia law".

Ljubljana – The parliamentary Home Policy Committee voted down late on Friday evening a motion by the centre-left opposition calling for a snap election. The emergency session, which lasted for more than nine hours, discussed the situation in the country. The government finds the motion to be unwarranted.

Ljubljana – The National Assembly is meeting for the October plenary session on Monday to debate at first reading an omnibus bill on de-bureaucratisation and a long-awaited long-term care bill. Changes to pharmacy legislation and to the law on police work and organisation are also on the MPs’ agenda.