The Trump administration is freezing payments under an "Obamacare" program that protects insurers with sicker patients from financial losses, a move expected to add to premium increases next year.

As President Donald Trump's first year in office comes to a close, the assessments are rolling in. Expect full reviews of the President's Twitter taunts, his low popularity, his campaign's ties to Russia, White House staff turmoil, his struggles to repeal and replace Obamacare despite GOP control of Congress, and - finally - the late-year success on major tax cut legislation.

Senate Republicans announced plans to vote next week on their latest bid to scuttle Obamacare even as a popular comedian who has become part of the U.S. healthcare debate denounced the bill and former President Barack Obama on Wednesday warned of "real human suffering." 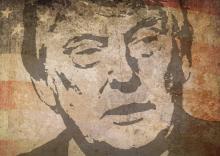 U.S. President Donald Trump threatened on Saturday to end government payments to health insurers if Congress does not pass a new healthcare bill and goaded them to not abandon their seven-year quest to replace the Obamacare law, Reuters reports.

The latest attempt to repeal the Obama-era healthcare act has failed after a dramatic night in the US Senate, reported BBC.

At least three Republicans - John McCain, Susan Collins and Lisa Murkowski - voted against the bill, which needed a simple majority to pass.
President Donald Trump said the three had "let the American people down".

In a stinging blow to President Donald Trump, U.S. Senate Republicans failed on July 28 to dismantle Obamacare, falling short on a major campaign promise and perhaps ending a seven-year quest by their party to gut the healthcare law.

The Senate blocked the latest Republican attempt to repeal Obamacare in a dramatic floor vote early Friday morning, yet again stalling — for now — the key campaign goal that eludes the GOP six months into the Trump administration.

The US Senate voted 51-50 Tuesday to proceed with a debate on Republican plans to repeal Barack Obama's health care reforms, according to France24.

The vote was a victory for President Donald Trump, who spent weeks cajoling, strong-arming and warning Republicans to get on board with his effort to overhaul Obamacare.