Ljubljana – The Eco Fund has reduced subsidies for electric vehicles in its latest tender published in the Official Gazette. The fund decided for the move because the overall volume of subsidies had been rising in recent years as the number of subsidised vehicles almost doubled each year while the price of vehicles has been dropping.

The construction sector and others dependent on it are in for a massive investment injection in the coming years through the new state subsidy program "Exoikonomo-Aftonomo," which kicks off on Friday in the region of Epirus and will cover the entire country in the next few weeks.

Labour, Family, Social Affairs and Equal Opportunities Minister Janez Cigler Kralj presented the scheme to the Economic and Social Council (ESS), after which the country's main industrial relations forum set up two task forces to go over the bill over the weekend.

Bars and restaurants will have more outdoor space on sidewalks according to a bill that will be submitted to Parliament on Monday that also slashes municipal fees for catering business but also introduces strict fines.

The European Union Court of Justice has ruled in favor of awarding a total of 435 million euros in farming subsidies to Greece after upholding Greek appeals against previous convictions that had led to the aid being withheld.

The court made two decisions, one issued on February 13 and another on April 30, in response to two appeals by Greece's State Legal Council.

The government is pondering different schemes to tackle reduced employment that would see it subsidizing part of lost salaries or social security contributions, once the country enters the stage of a gradual return to a new kind of normalcy. 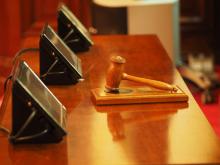 Bulgaria's Parliament on March 23 voted to approve the President's veto on the State of Emergency Measures Act. The law was passed on March 13 and provided for regulating the measures and actions during the month-long state of emergency introduced in connection with the coronavirus epidemic, BNT reported.

The US designated Bulgaria a developed country. The measure makes it easier for Washington to launch investigations and impose customs and other penalties if it finds unlawful subsidies or commercial practices, BNR reported.

The range and the levels of fees and commissions that local banks can charge retail and commercial clients have been lowered, the Turkish Central Bank and the country's banking watchdog regulator (BDDK) have announced.

The measures will cut the various charges banks can charge financial consumers to 16 from 20, the BDDK said.

Technology will play a central role in the new European Union subsidies package for the 2021-27 period, the Multiannual Financial Framework, which is currently being planned by EU and national authorities.