The Croatian parliament started its session with a minute of silence to commemorate International Holocaust Remembrance Day on Thursday, while a delegation led by Deputy Prime Minister Boris Milosevic and Culture Minister Nina Obuljen Korzinek laid wreaths at the Mirogoj Cemetery in the capital Zagreb.

Croatian leaders' contrasting attitudes towards Tuesday's annual commemoration of the murder of a Croatian family during the independence war drew equally contrasting responses.

Zagreb's new Left-Green mayor, Tomislav Tomasevic attended the commemoration of the murder of the Zec family in 1991 in person.

Arsic was found guilty of committing the crimes on May 21, 1999 during a police operation against Kosovo Albanian civilians in Pristina's Emshir neighbourhood.

Historian Dejan Ristic also attended the meeting in the premises of the Patriarchate of the Serbian Orthodox Church. 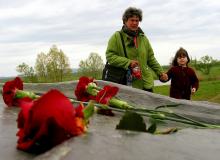 Several times a week, the Memorial Centre at Donja Gradina - the place where prisoners in the Ustasa-run Jasenovac-Stara Gradiska concentration camp complex in Croatia were brought every day to be liquidated - publishes posts on Twitter commemorating the lives of the camp's victims.

After the St. Nedelja's Day service was over, the church was locked to be up and again will stay locked until the annual service is held again in 2022. Few Serbs live nearby, and the young priests who used to have lodgings on the church's premises are long gone.

In 36 hours, 15.000 Serbs were expelled from Western Slavonia, which was part of the then Republika Srpska Krajina and under UN protection, while 283 Serbs were killed.
More than 16.000 members of the Croatian armed forces marched on Western Slavonia on May 1, with about 15.000 inhabitants and 4.000 soldiers.

Prime Minister Andrej Plenkovic told the annual commemoration at Jasenovac on Thursday that the Independent State of Croatia, NDH, a fascist puppet state run by the Ustasa movement and supported by Nazi Germany and Fascist Italy, was "one of the most tragic periods in Croatian history".

Human Rights House Zagreb said in its annual report published on Thursday that there has been "no significant progress in the prosecution of war crimes in 2020" in Croatia.