Ljubljana – Slovenian and Croatian football legends played a charity match on Saturday in the Croatian town of Petrinja to raise funds for the area that was hit by a devastating earthquake at the end of last year. The Croatian Red Cross was handed out a donation of EUR 50,000, the Slovenian Football Association (NZS) said.

Turkey is ready to support Croatia on the issue of responding to disasters, Foreign Minister Mevlüt Çavuşoğlu said on Feb. 26 and pledged to provide help in the reconstruction of earthquake-affected zones.

The quake had a magnitude of 4.3 on the Richter scale.
Residents of Banja Luka felt an earthquake today, just before 11 a.m., with an epicenter in central Croatia.
According to the European Mediterranean Seismological Center (EMSC), the epicenter was 14 kilometers southwest of Sisak, near Petrinja.

Ljubljana – A humanitarian football match between Slovenian and Croatian legends will be played in the Croatian town of Petrinja on 13 March to raise funds for the area that was hit by a devastating earthquake at the end of last year. 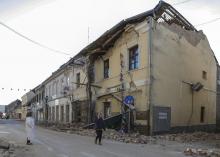 More than a month after a powerful earthquake hit central Croatia, lawmakers on Friday will vote on amendments to the post-earthquake reconstruction law - amid complaints that the basic needs of many people in the affected areas have still not been met.

A new earthquake measuring 3.9  on the Richter scale was recorded 28 minutes after midnight in central Croatia, BTA reported.

According to preliminary data, the epicenter was again in the vicinity of Petrinja and Sisak this time. The quake was felt in the capital Zagreb and part of Bosnia and Herzegovina.

A new quake of magnitude 4.2 on the Richter scale was registered this morning near the Croatian city of Petrinja and its vicinity, the Index website reported, quoted by BTA. The earthquake was also felt in Zagreb.

Another earthquake was felt at around 7:50 am in the area of Petrinja and the surrounding area, with a magnitude of 4.5 on the Richter scale.
The quake was also felt in Zagreb, reports Index.hr.

Croatia's Seismological Service on Wednesday at 6.15am, 6.26am and 6.29am recorded three more earthquakes centred not far from the town of Petrinja, some 60 km south of Zagreb - the town which was seriously damaged by powerful quakes on Tuesday that killed at least seven people.

A search for survivors in Croatia stretched into the night on Dec. 29 after a powerful earthquake killed at least seven people in the country's interior, tearing down rooftops and piling bricks in the streets.