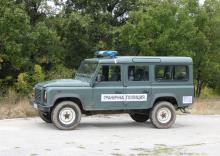 Temporary anti-epidemic measures are introduced for entry of persons arriving from other countries on the territory of the Republic of Bulgaria, from December 1, 2021, according to an assessment of the spread of COVID-19 in the respective country.

Fourteen people died on Nov. 30 in an Azerbaijani military helicopter crash which went down in the east of the Caucasus country during a training flight, officials said.

"Fourteen people died and two more were wounded as a result of a state border service helicopter crash," the ex-Soviet republic's frontier guard said in a statement.

Turkish and Azerbaijani Red Crescent organizations have inked a deal to improve humanitarian aid capacity in the region, diversify and expand the scope of their activities.

The agreement is of great geopolitical and energy importance

Turkey, in order to prevent the navigation and the soundings being conducted by the NAUTICAL GEO research vessel, is proceeding with the commitment of the region and naval exercises. The freezing of an area with illegal NAVTEX is from today until October 5.

Turkic Council members are meeting in Istanbul on Sept. 27 to discuss current developments in Afghanistan, where the Taliban have taken power.

Arad police caught 30 Turkish migrants who allegedly entered the country illegally through Serbia, and were accommodated in Arad and in the neighboring town of Vladimirescu, in several boarding houses.