Prime Minister Kyriakos Mitsotakis will chair a meeting of the government's national security council on Thursday.

The meeting is scheduled at 12 noon.

Mitsotakis will also participate in a virtual meeting of the European Council at 7 p.m.

Foreign Minister Nikos Dendias will hold meetings with representatives of Greece's opposition parties on Monday, as part of their regular briefing on current foreign policy issues.

The conservative government is mulling the establishment of a dedicated police force for public transport in the greater Athens region, Transport Minister Kostas A. Karamanlis has said.

SYRIZA voted for the contract

Manfred Weber, leader of the European People's Party in the European Parliament, has backed the proposal put forward by Greek Prime Minister Kyriakos Mitsotakis on Tuesday for the introduction of a coronavirus vaccination certificate that would ease travel between member-states in the bloc.

Former socialist minister Andreas Loverdos has been removed from the post of Movement for Change (KINAL) parliamentary spokesman.

The decision was announced to him Tuesday by the leader of the center-left alliance, Fofi Gennimata.

According to reports, relations between the two had cooled after Loverdos made known his intention to run for the leadership of KINAL.

The new, 61st round of exploratory talks between Athens and Ankara over territorial claims in the Mediterranean Sea will start on January 25 in Istanbul, Greece's Foreign Ministry announced on Monday evening.

Greece hopes that its exploratory talks with Turkey will restart from where they left off in March 2016, Prime Minister Kyriakos Mitsotakis said on Monday. 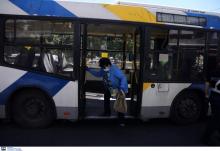 Another 300 buses will be added to the existing fleet in Athens over the next three months, according to Transport Minister Kostas A. Karamanlis, who also announced that 609 drivers will be hired in January.

Speaking to Parapolitika radio on Friday, he said 1,280 buses are currently circulating on the streets of Athens and 1,100 services have been added per day.