The ceremony will be opened tonight with a concert at the Croatian National Theater, and Milanovic will not be attending, it was confirmed from his office, Zagreb-based N1 television reports.

The standoff over President Donald Trump's impeachment trial deepened as Senate Majority Leader Mitch McConnell said there will be "no haggling'' with Democrats as House Speaker Nancy Pelosi demands for more details and witnesses.

The simple fact that it was agreed in advance that Donald Trump and Kyriakos Mitsotakis would not hold a joint press briefing following their meeting on Tuesday in Washington was a clear indication of how the US president perceives Greek-American relations. It also underscores the justifiable fear in Athens of Trump's impulsive behavior.

Today, the Russian President Vladimir Putin will participate in the commissioning of the Turkish Stream gas pipeline. The event will be hosted by Turkish President Recep Tayyip Erdogan, RIA Novosti reported.

The presidents of Turkey and Russia, Recep Tayyip Erdoğan and Vladimir Putin, have issued a joint call on all parties to stop hostilities as of Jan. 12 after a bilateral meeting in Istanbul on Jan. 8.
Erdoğan and Putin released a joint statement after their meeting citing their shared views on the latest developments in the Middle East, Syria, and Libya.

US President Donald Trump hailed his country's "extraordinary" relations with Greece as he welcomed Prime Minister Kyriakos Mitsotakis at the White House on Tuesday.

Russian President Vladimir Putin and Syrian President Bashar al-Assad on Tueday visited the Mariamite Cathedral of Damascus, one of the oldest Greek Orthodox churches in the capital, as part of a rare visit to Syria.

French President Emmanuel Macron says he wants to reach a "quick compromise'' in talks this week with worker unions as nationwide protests and strikes rage on against the government's plans to overhaul the pension system.

During a Cabinet meeting on Jan. 6, Macron insisted that the new system must be financially sustainable, according to government spokeswoman Sibeth Ndiaye.

The Chinese delegation, headed by Deputy Prime Minister Liu He, will leave for Washington on January 13 to sign the first part of a trade deal between the two countries, according to South China Morning Post newspaper, citing its own sources. 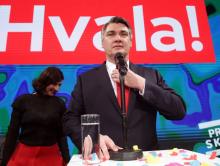 A Croatian political expert said Sunday's presidential election victory by the centre-left candidate, Zoran Milanovic, was to some extent a protest vote against his rival's "hard-core nationalist campaign".