"Our condition for negotiating with 'We Continue the Change' was that Kiril Petkov should not be a candidate for prime minister. This condition is met. We will talk to WCC about forming a government". This was said by BSP leader Kornelia Ninova after it became clear that WCC was proposing Asen Vassilev for Prime Minister.

The writer, who died on this day in January 1950 in London, was most famous for two novels which explored totalitarian politics: 1984 and Animal Farm

The UAE has sent a plane with 52 tons of food products in support of Ukrainian refugees to the Republic of Bulgaria as part of the UAE's ongoing assistance to alleviate the humanitarian consequences facing Ukrainian refugees in Ukraine's neighboring countries, the Emirates News Agency reported.

The number of Ukrainian refugees in Bulgaria is estimated at more than 90,000.

Leader of "There Is Such a People" Slavi Trifonov will sue the resigned Prime Minister Kiril Petkov. This is clear from a statement of the Sofia City Court.

A political shift is beginning to take hold across the U.S. as tens of thousands of suburban swing voters who helped fuel the Democratic Party's gains in recent years are becoming Republicans.

Undermined by years of mutual ignorance, disrespect and deceit, the Balkans' EU accession process has finally succumbed to both European and Balkan leaders' populist, short-sighted policies 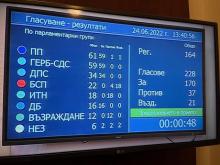 With 170 votes "In favor", parliament accepted Democratic Bulgaria's proposal to give a mandate to the Council of Ministers to accept the French presidency's proposal for North Macedonia.

He got into a verbal dispute with the chairman of the Parliamentary Group of "There Is Such a People" Toshko Yordanov.