Each school student should be handed an iPhone due to the intensive development of mobile technologies, Bulgarian MEP Barekov said while unveiling his program.

Presenting his party's platform ahead of the early vote on March 26, Barekov pointed to that as the only socio-economic promise he would make for the election.

Zoran Marjanovic, the husband of Jelena Marjanovic, has passed a lie detector test, but rremains in police custody, daily Blic is reporting.

At its regular meeting on Wednesday, the Bulgarian government adopted a draft law on the prevention of corruption and forfeiture of illegally acquired property.

The bill foresees the creation of united anti-corruption body - national bureau for prevention of corruption and forfeiture of illegally acquired property.

Vucic: "There was no coup, but someone tried to undermine government"

Serbian Prime Minister Aleksandar Vucic has told state broadcaster RTS that he does not think "a coup" that the media speculated about took place. But, he added that he sees "a permanent intent to undermine the government."

Prime Minister Aleksandar Vucic was questioned on Sunday at his own request and passed a polygraph test, Nebojsa Stefanovic has announced.

The interior minister also told a news conference in Belgrade that "new proof has emerged that the whole scandal surrounding prime minister was fake and rigged."

It was announced earlier that the police will take his statement as a citizens, on the request of the prosecutor, in order to collect information in pre-trial proceedings. 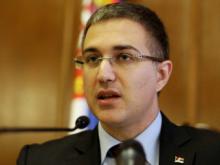 Stefanovic said he was ready to resign if there is evidence that police had wiretapped the opposition leader.

A polygraph machine adapted for Turkish culture is currently under development at Istanbul's Üskudar University.

A Turkish university is planning to develop a new lie detector unique to the Turkish people, on the grounds that "some statements which are regarded as a lie in western countries are not a lie for Turks."