Prague – President Borut Pahor called for a strong and effective Europe as he appeared on Tuesday as a speaker at the Prague European Summit, recalling the bloc’s fundamental values such as rule of law that he said should be understood the same way. He also received the Visions for Europe Award.

A 26-year-old evangelical Christian and theology student at Prague's Charles University, Roll founded Million Moments alongside Mikulas Minar in 2017. Dressed in his trademark mustard-yellow, it was the red-headed Minar who originally chaired the organisation and so featured prominently on the front pages as the biggest protests in the country since the Velvet Revolution erupted.

Czechs lit nearly 30,000 candles at Prague Castle, the seat of the presidency, on Monday evening to pay their respects to the pandemic's victims, AP reported. The hard-hit European Union nation of 10.7 million people has registered at least 29,711 virus-related deaths.

By way of contrast, Chinese pressure to stop Jaroslav Kubera visiting Taiwan took a more sinister turn when the Senate president keeled over from a heart attack. When his successor, Milos Vystrcil, embarked on the trip anyway in September, Beijing hoped to similarly scare Prague with threats of retaliation.

Czechs seeking to buy an average sized apartment of 70 square metres faced paying over 11 times their annual salary in 2019, more than their peers in any other European country. That's a ranking they enjoyed for a fourth straight year. In the capital Prague, the average price per square meter rose to €3,395 last year, far above regional peers such as Budapest and Bratislava.

An estimated 250,000 people rallied in Prague on Sunday to demand the resignation of Czech Prime Minister Andrej Babis in the country's largest protest since the fall of communism in 1989.

A number of media outlets in Serbia, Bosnia and Croatia duly "reported" this development, some for the second time, since they also reported it three years ago.

Most of them quoted Radio Free Europe, RFE, saying that after the movement was registered on April 18, this had drawn negative reactions from the public and prompted the Montenegrin NGO Civil Alliance to request a ban.

When the air in Prague is too polluted, public transport in the Czech capital will be free of charge in the future, DPA reported.

The Dirty Air Scheme will allow anyone, including tourists, to benefit from free travel, a city administration spokesman said. 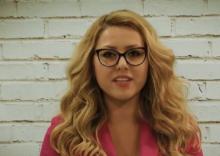 SOFIA -- A Bulgarian TV reporter has been found dead in a northern border city and authorities say they are investigating into whether it was a random crime or was connected to her reporting work, reports RFE/RL.

The body of Viktoria Marinova was found in a park in the city of Ruse, officials said on October 7.