The State Department said on Oct. 25 it is seeking to work with Turkey on issues of mutual interest following a row that began after the U.S. joined with nine other countries to call for the release of Turkish businessman Osman Kavala.

The Turkish president on Oct. 25 slammed envoys of 10 countries over their statement on the ongoing case of businessman Osman Kavala. 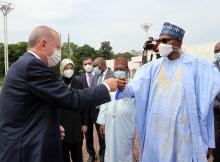 Erdoğan and Nigerian President Muhammadu Buhari signed seven agreements during a four-day tour of the Turkish president to three African countries, including Angola, Togo and Nigeria.

"While most of the G20 countries threw in the towel in 2020 at the peak of the pandemic, we became the second-largest growing country among them by expanding 1.8%," he said, speaking at Turkey-Angola Business Forum. 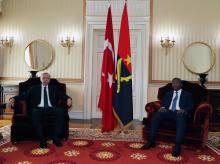 Turkey is committed to boosting trade ties with the entire Africa and will hold a Turkey-Africa Business Council meeting very soon, President Recep Tayyip Erdoğan, who is visiting Angola as part of his three-nation tour to the continent, has said.

Turkey's trade with all African countries is worth around $25 billion and Turkey is hoping to increase it, Erdoğan stated. 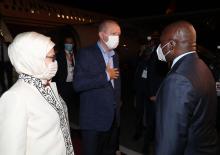 German Chancellor Angela Merkel arrived in Turkey on Oct. 16 for talks with President Recep Tayyip Erdoğan before leaving office after 16 years in power.

Merkel on arrived at the Huber Mansion in Istanbul to meet with Erdoğan.

Merkel and Erdoğan boarded a golf cart and visited the beach area of the mansion.

The Turkish president will leave on Oct. 17 for a four-day diplomatic tour to three African countries, diplomatic sources have told Anadolu Agency.

The presidents of Turkey and Russia on Oct. 7 held a phone call to discuss bilateral ties and regional issues, according to the Turkish Communications Directorate.

Turkey on Sept. 30 vowed to contribute to the fight against climate change.

This came in a meeting of the country's National Security Council chaired by President Recep Tayyip Erdoğan in the capital Ankara. The meeting lasted for about three and half hours.