The new Bulgarian ministers are to propose the names of their deputies, with newly-appointed Prime Minister Boyko Borisov having the final say.

Borisov's idea is that choosing deputies will help heads of ministries to be fully responsible for their decisions, media outlets report. 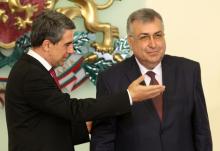 President Rosen Plevneliev and former caretaker Prime Minister Georgi Bliznashki are due to outline the results of the interim government's three-month tenure.

The event follows the transfer of power on Friday at which Boyko Borisov took over from Bliznashki as PM and his minority coalition supported by nationalist Patriotic Front and left-wing ABV assumed office.

Boyko Borisov, who became Bulgaria's Prime Minister on Friday after Parliament gave him the "thumbs up", is certainly a sensation in Bulgaria's politics, being the only head of government who managed to get the office for a second time since democracy was reinstated in 1989. 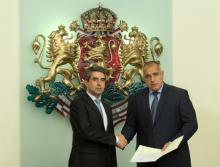 Bulgaria's President has suggested that Bulgarian citizens are not that interested in whether their government has a left-wing, a right wing or a centrist orientation but whether they are keeping their promises.

Bulgaria's newly-appointed Prime Minister Boyko Borisov has said he expects that his ministers will be able to get Bulgaria out of the current "free fall".

"None of us is happy and satisfied," Borisov explained during the ceremony marking the transition of power held at the Council of Ministers after Parliament voted to approve the new government.

Krasen Kralev is Minister of Sports in the coalition cabinet of GERB party and the Reformist Bloc (RB) led by Boyko Borisov.

He was elected member of Bulgaria's Parliament in October 5 early elections running on GERB ticket.

Ivaylo Moskovski will serve as Minister of Transport, Information Technologies and Communications in the coalition cabinet of GERB party and the Reformist Bloc (RB) led by Boyko Borisov.

The members of Bulgaria's new Council of Ministers have been given the green light by lawmakers.

GERB leader Boyko Borisov has been backed by Parliament in his bid to become Bulgaria's Prime Minister.

A stable majority of 149-85 (0 abstained) supported his candidacy.

Borisov is now officially the first politician in Bulgaria's recent history to have a second term in office as Prime Minister.

Lilyana Pavlova will be minister of regional development in the coalition cabinet of GERB party and the Reformist Bloc (RB) led by Boyko Borisov.