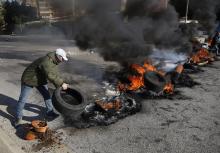 Lebanese protesters blocked several roads around the capital of Beirut and in other areas of the country on Jan. 14 in renewed rallies against the ruling elite they say has failed to address the economy's downward spiral.

French police used tear gas to disperse protesters in front of President Emmanuel Macron's party headquarters, DPA and BTA reported. The protest was held against the background of the ongoing strike against the pension reform.

Dozens of protesters fled after being covered by thick clouds of tear gas in the narrow streets near the Paris Opera House.

A court in Israel ordered settlers to evacuate a home in Hebron they had been living in since 2005 as an Israeli firm had not legally purchased it from its original Palestinian owners.

According to local media reports, the Jerusalem District Court ruled that the company used illegal means to purchase the house, which belonged to the Bakri family.

Four public transport buses in the capital were set on fire, while others were seriously damaged in mass protests against the new citizenship act.

Police are using tear gas against students at Jamia Millia Islamia University in the southern part of the capital. More than 100 activists and 35 police officers, including some senior officers, were injured.

Amnesty International said on Dec. 16 that at least 304 people were killed in last month's anti-government protests in Iran, a significantly higher number than what the rights group had reported previously. 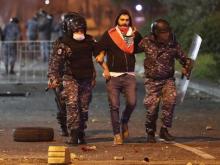 Protesters and police were injured as a result of clashes in Lebanon's capital Beirut as demonstrators continue to demand a change in government.

As a result, parts of public transport, schools and many businesses will be closed following the escalation of expected violence.

The Supreme Court prosecutor's office has decided to review the release in summer of Epaminondas Korkoneas, a police special guard convicted for the deadly shooting in December 2008 of teenager Alexis Grigoropoulos in the downtown Athens district of Exarchia, it emerged on Monday.

Tens of thousands of Iraqis massed in Baghdad's Tahrir Square on Nov. 1 in the biggest demonstrations since anti-government protests erupted a month ago, defying security forces that have killed scores of people and harshly criticizing Iran's involvement in the country's affairs.