Today cloudiness will be variable, often decreasing to sunny. It will blow moderate, northwestern wind in the Northwest, which will weaken in the evening and will orient from the Southwest. Maximum temperatures between 17 ° and 22 °, in Sofia around 18 °. This was reported for FOCUS News Agency by the National Institute of Meteorology and Hydrology .

Mountain rescuers have helped two hikers in the Beli Iskar River valley, the Mountain Rescue Service with the Bulgarian Red Cross) told Focus News Agency. The hikers were on their way to Musala hut on Saturday night into Sunday when they strayed from their path in the fog and got into the valley along the Beli Iskar River. They spend the night there.

Not for the first time, Bear Grylls has been criticized for his attitude to nature, publications in the Western media show on the case in Bulgaria. He, his partner, and the company, organized the filming in Rila, are threatened with fines because the two men were swimming in the Karakashevo lake, started a fire and caught and killed the frog.

Today before noon will remain cloudy with snow, more significant in the mountainous regions. After noon from the North the snow will stop and clear sky is expected, late in the Rila-Rhodopes region. Such is the forecast of the time of the National Institute of Meteorology and Hydrology (NIMH), announced the FOCUS News Agency

A 35-year-old woman has died after jumping from the bridge on Vitosha Blvd over Bulgaria Blvd. This is reported by the Ministry of Interior press center.

The case happened this morning at 10.00.

A 25-year-old man killed in a particularly cruel way his parents, his brother and grandmother in Novi Iskar.

The young man killed his family with an ax.

He is detained by the police. An investigation is under way.

Five new cases already of measles in our country. Four of them are children from the Blagoevgrad region. The fears of the medics are that the cases will increase significantly.

Sensors will be installed to monitor air pollution at 22 locations in Sofia. They will be part of the municipal network and are expected to start operating by the end of the year, reports Mediapool.

Three Bulgarian students were among the winners of the Space Tube project supported by Microsoft, Airbus and 3M. Students from several European countries, including Bulgaria, were provoked to test their knowledge and explore space, the press service of GERB said. 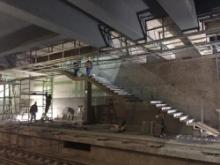 About 90% of the construction works of the metro station from Line 3 of the metro "Bul.Bulgaria" are done. Sofia Mayor Yordanka Fandakova and the Executive Director of Metropolitan EAD Prof. Stoyan Bratoev checked the progress of the site. Finishing works are currently under way.