Provinces of the Netherlands

Festim Lato, residing in Afferden, a village in the Dutch province of Gelderland, has his own private army. Various Dutch authorities were aware of this, but did not intervene, the Dutch Telegraaf reports based on sources and its own research.
Lato was the self-proclaimed President of Chameria, an unrecognized republic on the border of Albania and Greece.

Fatma Şahin, the mayor of the southeastern province of Gaziantep, has cancelled a planned visit to Deventer in the Netherlands after consultations between Turkish and Dutch diplomats about the reservations of The Hague over the timing of the visit.

urkish Prime Minister Binali Yıldırım claimed on Dec. 31 that there is “no difference” between opponents of a controversial recent state of emergency decree law and members of the Fethullahist Terrorist Organisation (FETÖ). 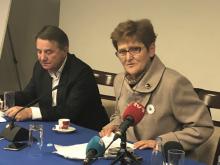 Despite some shortcomings, the Hague Tribunal, which closes this month, has identified and prosecuted those responsible for grave crimes and brought some justice to people who suffered, said members of Bosnia’s Association of Victims.

The government will approve the providing of guarantees to the Hague Tribunal for Ratko Mladic's provisional release for medical treatment.

This is according to Justice Minister Nela Kuburovic.

Moscow says it was "bewildered" at the refusal of the Hague Tribunal to temporarily release Ratko Mladic for medical treatment in Russia.

Had the Battle of Arnhem succeeded, WWII in the European Theater might have ended a lot sooner, millions might not have died, and Germany might not have been split in two.

The images that were recorded in Madrid were the peak that racism, foolishness, shamelessness and mercilessness could ever reach. I am sure you know about the incident that occurred earlier this week already but let us quickly review it. The famous PSV Eindhoven team from Holland was to play against Atletico Madrid.

The threat of drones to civil aviation traffic has been rising in Turkey and the country may use eagles in a bid to ease this threat, according to officials.