North and South Korea have re-established hotlines that were cut off by Pyongyang a few months ago this morning, Reuters reported.

Last week, North Korean leader Kim Jong-un expressed readiness to re-establish liaison lines that Pyongyang cut off in early August - just days after they opened for the first time in a year - in protest of joint US-South Korea military exercises.

Diplomatic missions of 12 states have suspended work in North Korea and all foreign personnel of international humanitarian organizations have left the country due to the challenging situation, namely over the lack of goods and medicine, the Russian Embassy in Pyongyang wrote on its Facebook page.

North Korea fired two projectiles that appeared to be short-range ballistic missiles into the sea off the east coast of the Korean peninsula, South Korea's military said on March 21, after what analysts said was a show of confidence during the coronavirus epidemic by announcing an April legislature session.

North Korea said on Nov. 5 the U.S. redesignation of Pyongyang as a sponsor of terrorism is dimming prospects for nuclear diplomacy between the countries.

When we visit one of the world-famous landmarks, we want to shoot it from all kinds of points of view.

North Korea launched at least two projectiles into the sea on Aug. 16, South Korea's military said, shortly after Pyongyang described South Korea's president as "impudent" and vowed that inter-Korean talks are over.

North Korea has detained a crew of a vessel of 15 Russians and two South Koreans for violation of the entry regime on its territory. This was announced by the Russian Embassy in North Korea, quoted by Reuters. 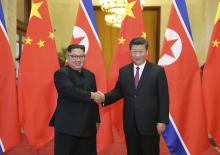 Chinese President Xi Jinping started a historic visit in Pyongyang on June 20 to reboot a troubled alliance, as he and North Korean leader Kim Jong Un face their own challenges with U.S. President Donald Trump.

South Korean President Moon Jae-in travels to Pyongyang this week for his third summit with Kim Jong Un, looking to break the deadlock in nuclear talks between North Korea and the United States.