Post Office tunnels buried more than six miles under Britain’s streets are set to open to the public for the first time ever.

Known as the ‘Rail Mail’, the sprawling network of underground tracks were built in 1927 and had the capacity to carry over four million letters at any given time.

Canadian feminists will be stuck singing O Canada! with the word “sons” instead of the politically correct “us” for the country’s 150th anniversary on July 1st after a bill to neuter the anthem unexpectedly stalled in Parliament. 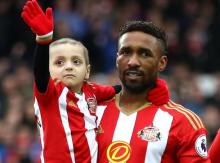 Jermain Defoe has broken down into tears while paying tribute to Bradley Lowery and admitting the terminally ill six-year-old only has “days” to live.

The former Sunderland player has forged a close friendship with the young Black Cats fan and mascot who has the rare childhood cancer neuroblastoma.

“We are in a difficult negotiation,” explained Mr.

Sexy Greek dj Maggie Charalambidou, who was fantasy for most Greek males in the 90s keeps on proving why she has still got it. The hot, busty brunette, who has an increasing number of social media followers, shared a photo showing off her best “asset” captioned “I always loved and like the sexy photos! ️ That’s why I take them! ️ It’s aesthetics!

Religious people are more tolerant of different viewpoints than atheists, according to researchers at a Catholic university.

A study of 788 people in the UK, France and Spain concluded that atheists and agnostics think of themselves as more open-minded than those with faith, but are are actually less tolerant to differing opinions and ideas.

European Union member states are resisting further integration within the bloc after the Brexit vote, a former EU Commission chief has said.

Speaking to RT, Mr Barroso said a drive for integration had led to resistance.

Jason Becker, the guitarist/composer who has had amyotrophic lateral sclerosis (ALS, aka Lou Gehrig’s Disease) for over 27 years, has taken to Facebook to speak out against the Senate health care bill.

A sexy senorita grew so fed-up with people fluffing up their grammar she shot a sultry video to teach viewers proper punctuation.
The stunning Spanish journalist named only as Romina says she is “exasperated” with people getting simple things wrong.
So she filmed her own sexy music video in a bid to make folk learn good Spanish grammar.

The 41-year-old youthful Taiwanese sensation Lure Hsu rose to fame thanks to her youthful appearance when she attended an entertainment show with her sister, Sharon, an actress.