exacerbated fuel shortage crisis In the UK over the weekend amid "panic buying" from motorists so anxious that the government announced on Monday evening, it had asked the military to stand by for deliveries if needed.

If we compare the data of 2020 and 2019, we can see that electricity generation has fallen by almost 8%, which is a record for the last 10 years. Consumption also decreased by about 2.5%, but the export-import balance, which decreased by 41%, according to ESO data makes the strongest impression, energy expert Pavlin Pavlov told 3e news.net.

One person was killed in the Iranian city of Sirjan during protests that erupted after President Hassan Rouhani's government imposed gasoline rationing and price hikes of at least 50 percent, Iranian ISNA news agency reported on Nov. 16.

Restrictions on vehicles entering central Athens will be reinstated as of September 29, the Traffic Police said Friday.

The restrictions are enforced every year and are designed to reduce traffic congestion in downtown Athens.

Restrictions on vehicles entering downtown Athens have been lifted on Monday. The free circulation of vehicles will last until September 29, according to the Traffic Police.

The restrictions are enforced every year and are designed to reduce traffic congestion in downtown Athens.

There will be no restrictions on vehicles entering central Athens as of Friday and through September 29, the Traffic Police said Thursday.
The restrictions are enforced every year and are designed to reduce traffic congestion in downtown Athens. 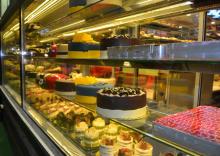 Turkey's Health Ministry has signed a protocol with pastry shops and restaurants in a bid to reduce the amount of salt and sugar added to the food by 4-5 percent.

There will be no restrictions on vehicles entering central Athens from Friday until the end of the summer, the Traffic Police confirmed on Monday.

The restrictions, which go into effect every fall through early July, are designed to reduce traffic in the downtown Athens area.

Beijing declared its third major smog alert of 2018, and the second this month, just a day after being named the top performer among 28 Chinese cities that took special measures to rein in pollution.

Rome, one of Europe's most traffic-clogged cities and home to thousands of ancient outdoor monuments threatened by pollution, plans to ban diesel cars from the centre by 2024, its mayor has said.

Virginia Raggi announced the decision on her Facebook page on Tuesday, saying: "If we want to intervene seriously, we have to have the courage to adopt strong measures".