As two NATO countries, Turkey and the U.S. should be in a very different position, the Turkish president said on Sept. 24.

The current course of U.S.-Turkey relations "does not bode well," President Recep Tayyip Erdoğan said on Sept. 24, noting that he didn't have a good start with U.S. President Joe Biden, who took power earlier this year.

Nikos Dendias had the opportunity to inform his European counterparts about the latest episode of Turkish delinquency during the meeting of the Foreign Ministers of the European Union.

"Very welcome step that Turkey is ready to ratify the #ParisAgreement on climate," Frans Timmermans, the European Commission's executive vice president for the European Green Deal, said on Twitter.

After two decades in Afghanistan, the United States should do more to help the country's refugees, Turkish President Recep Tayyip Erdogan said in remarks aired on Sept. 22.

Turkey hosts the world's largest refugee population - some 4 million, mostly Syrians - and has warned that it cannot accept any more arrivals from Afghanistan.

British Ambassador to Ankara Dominick Chilcott has congratulated Turkey's announcement that it will ratify the Paris Climate Convention in October.

Turkey is planning to submit the Paris climate pact to parliament for approval next month in line with its constructive steps and a declaration of its contributions to the cause, President Recep Tayyip Erdoğan said on Sept. 21. 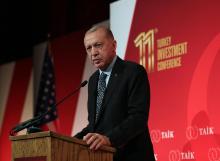 President Recep Tayyip Erdoğan on Sept. 20 called on businesspeople in the United States to believe in Turkey's potential and make investments in the country.

The groundwork for a working visit to Russia by Turkey's president is being laid, a Kremlin spokesman said on Sept. 20.