The Greek government, along with the UN and the EU’s aid departments are under fire for mismanaging a multimillion-euro fund earmarked for refugees in Greece. Reporter Patrick Kingsley for the online edition of British newspaper The Guardian filed a piece uncovering the extent of the mismanagement.

This image, by Cologne-based Palestinian photojournalist Ali Nouraldin, won second prize in the UNICEF Photo of the Year 2016 awards, it was announced by the jury in Berlin, Germany, Tuesday. The photograph shows refugee children watching a movie in an improvised open-air cinema at the Idomeni refugee camp near the Greek border with the Former Yugoslav Republic of Macedonia (FYROM).

Without any reason at all, according to the residents of Lesbos, migrants thrashed restaurants and shops. Money and goods have been stolen. Stones were used to break shop windows.

The incidents of violent fights in refugee hotspots between national groups are rapidly escalating. In the latest episode, a group of Afghani refugees and migrants clashed with Algerians at a refugee hotspot on the island of Chios, Sunday.

A total of 200 migrants and refugees, the majority of which were of African origin, arrived on the island of Lesvos overnight from four different spots. 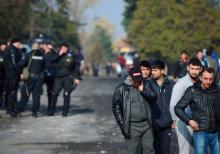 Syrian and Iraqi protection candidates make up for around 40%, each group taking nearly half of the figure.

An increase in arrivals of migrants from neighboring Turkey to Chios has fuelled concern on the island where tensions are already high due to the conditions at the overcrowded refugee camp at Souda and recent protests by far-rightists.

A total of 153 migrants landed on Chios over the weekend compared to 53 on Lesvos.

The riot in the refugee camp in Harmanli has been coordinated with similar disturbances in Italy, Greece and France, announced the State Agency for National Security (DANS).

The disturbances in the migrant camp in Harmanli came under control on Thursday night after the detention of 300 of its inhabitants.

As early as next month, tens of Afghanis from the refugee camp will be extradited, promised outgoing PM Boyko Borisov. He went personally to the placement centre where riots started on Thursday because of the quarantine imposed.

Migration Minister Yiannis Mouzalas inaugurated a revamped refugee camp in Ritsona, north of Athens, Tuesday. Around 680 people are staying in new container housing at the site.