AFP - A spate of bloody killings is fuelling unease in the Rohingya camps on the Bangladesh-Myanmar border, where overstretched police are struggling to protect nearly a million traumatised refugees from violent gangs.

Just 1,000 police officers guard the labyrinthine shanties that make up the giant camps and authorities want to more than double the force in the wake of the murders.

Greek police say eight people were slightly hurt and 19 were arrested following a violent brawl at a refugee camp on the island of Lesvos.

A police official said Tuesday three tents were also set ablaze during the fracas at the Moria refugee camp.

Police stepped in to quell the feud between rival groups that began late Monday and lasted for several hours. 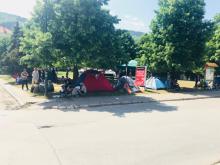 As EU leaders met in Brussels for a crunch summit on Thursday and Friday to discuss migration among other issues - and following rows in Albania over whether its government had agreed to host processing camps - Bosnia and Montenegro have stepped in to say they will also not host such centres.

A batch of new arrivals over the weekend pushed the population at the already overcrowded Moria refugee camp on the eastern Aegean island of Lesvos close to the 7,500 mark, after it had managed to ease down to 6,872 late last week - meager respite at a facility built for a maximum of 3,000 people.

Greek authorities say six people were injured and four others were arrested following an overnight fight in a refugee camp near the northern Greek city of Thessaloniki. 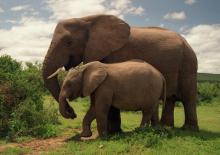 The elephants were stressed because the refugee camp blocked one of the routes that the animals have been using for centuries.

Twelve refugees were killed after frightened elephants ran over one of the largest refugee camps in the world, the BBC reported.

The animals destroyed many of the homes in a Bangkish camp in Bangladesh.

A growing number of Syrian refugees in Germany are seeking to return to Turkey as a new German legislation has introduced new barriers to family reunification, local media reported on April 12.

Volunteer doctors in Turkey treated 2,500 Syrians living in refugee camps in Aleppo on April 7 and 8, an association official said on April 9.

A 26-year old Syrian man set himself on fire at a refugee camp on the island of Lesvos on Thursday, in one of the most serious incidents involving stranded migrants in many months.

As Turkey’s military and allied Syrian rebel forces continue to push into the city center of Afrin in northwestern Syria, Turkey’s disaster agency is readying refugee camps and humanitarian aid for a possible refugee influx.