Spain has detained one of Europe's most wanted criminals, whose name is on the Europol's list, RIA Novosti reports.

A railway station and 12 shopping malls in Moscow were evacuated on Wednesday after anonymous tip-offs were called in about bomb threats, the RIA news agency reported, citing emergency services.

A spate of such calls in 2017 and this summer during the soccer World Cup proved to be hoaxes. 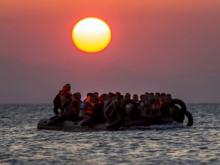 17 Turkish officials have asked for political asylum in Greece after sailing with an inflatable boat to a Greek island, RIA Novosti reported.

The Greek Coast Guard reported that 17 people had arrived on the island of Inousse, then transferred to Chios island and were handed over to the port authorities.

In the morning hours of Thursday, January 25, a Russian fishing boat with 21 people on board disappeared into the waters of the Japanese Sea, reports RIA Novosti, quoted by Focus.

Given the refugee crisis and the steady increase in the Muslim population, the EU is likely to face three scenarios that will determine its future, RIA Novosti contributor Igor Gashkov writes, adding that none of them could prevent inevitable ethnic, cultural and religious changes on the Old Continent.

The Italian TV viewers first discovered sexy Greek model Ria Antoniou back in 2012 when she was part of the “Dancing with the Stars” show. So it is no surprise that the blonde bombshell was chosen to feature in magazine “For Men’s” in a sizzling hot photoshoot. Behind the scenes footage of the hot babe was released with Ria in all her naked glory!

The mystery created by some leaked photos that surfaced last week showing sexy Ria Antoniou was solved. The hot Greek model-TV persona, who is pursuing a career in Italian TV, took part in a photo-shoot with internationally-renowned photographer Roberto Rocco for magazine “For Men”. 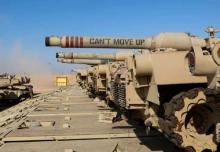 An invasion of Polish people picking up mushrooms ruined the teachings of an American tank unit near the western city of Jagan, RIA Novosti reported.

All the people who were inside the Palace of Justice in the Belgian capital were evacuated due to danger of explosion after a suspicious mini van was parked nearby, reported the television channel RTBF, cited by RIA Novosti.

The issues of Macedonia's name dispute with Greece and the country's accession to NATO "could be solved in three or four months."