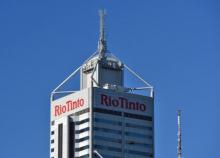 "A report released by Rio Tinto outlined a culture of bullying, harassment and racism at the global mining giant, including 21 complaints of actual or attempted rape or sexual assault over the past five years", Reuters reports, adding that nearly half of all employees who responded to an external review of company's workplace culture commissioned by Rio said they had been bullied, while racism

Brnabic told Happy TV that it was "unbelievable" that the people from that initiative, who, as she stated, said they were in favor of legality and constitutionality, proposed something like that.

After Serbia's government on Wednesday revoked a key decree greenlighting Rio Tinto's controversial lithium mining project, activists said they did not trust government promises that the mining project is over for good, fearing what might happen after elections in April.

"We have the requests of environmental organizations. These are the requests that were submitted to the Government on January 12, 2022," the Prime Minister said at a press conference immediately after the government session.
At the final session, the Government Decree on the spatial plan was revoked, Brnabi pointed out.

Protesters are seen during a rally outside the Rio Tinto office in Perth, Australia, 09 June 2020, after it detonated explosives in an area of the Juukan Gorge in the Pilbara, destroying two ancient deep-time rock shelters. Photo: PA-EFE/RICHARD WAINWRIGHT

After the session, Brnabic will address the media at 6:00 p.m.
"Rio Tinto didn't get a permit. At the moment, for me, that project is over."
As Tanjug has learned, yesterday's statement by the Prime Minister that Rio Tinto will no longer be in Serbia in a few weeks will be confirmed.

As it is stated, the address will be dedicated to the current protests and the company Rio Tinto.
Vui will also speak on the occasion of the Law on Expropriation and the Law on Referendum and People's Initiative.
On that occasion, President Vucic will announce what decisions he has made regarding the laws, and in accordance with his powers.

He also said that, as he did back then, he still supports this project, because it is good for Serbia.

Asked if he had consulted with lawyers, he said "it seems to me that they will sign the Law on Expropriation".