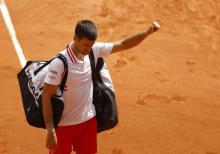 Italian Musetti retired, his infirmity was obvious and Djokovic reached the quarterfinals in the fifth set after a huge 6: 7, 6: 7, 6: 1, 6: 0 and 4: 0.
In this way, Musetti's hopes of becoming the eighth man in the Open Era to reach the quarter-finals on his Grand Slam championship debut ended.

For the ninth time in his career and the third time in a row, in the grand final, the Serb defeated the fourth seed, the Russian Danilo Medvedev, with 114: 5, 6: 2, 6: 2, after 114 minutes of the game.
It was the 18th Grand Slam trophy for the first player in the world who is expected to break Roger Federer's record for the number of weeks at the top of the ATP list on March 8.

Daniil Medvedev still can't find a way to beat Gilles Simon, losing 6-4, 6-0 in the Open 13 quarterfinals on Friday for a third loss in three matches against the French veteran.

The US Open runner-up and top seed in Marseille dropped his serve five times against the 35-year-old Simon, after breaking him in the first game.

Sixth seed Stefanos Tsitsipas has advanced to the third round of the Australian Open after his German opponent Philipp Kohlschreiber withdrew due to injury, organizers said on Wednesday.
ATP Finals champion Tsitsipas, 21, will meet either Canadian 32nd seed Milos Raonic or Cristian Garin of Chile in the third round, having never faced either opponent before.

Few players have looked capable of breaking the stranglehold Rafa Nadal, Roger Federer and Novak Djokovic have had on Grand Slams over the last 15 years but if anyone can end their reign in 2020 it is likely to be Stefanos Tsitsipas.

Stefanos Tsitsipas was clinical as he picked up his first win of the season at the ATP Cup in Brisbane on Sunday against a temperamental Alexander Zverev of Germany, who was almost reduced to tears due to problems over his serve.

Stefanos Tsitsipas kept his nerve in the key moments to beat six-time champion Roger Federer 6-3, 6-4 on Saturday and reach the final of the season-ending ATP Finals.

Tsitsipas saved 11 of 12 break points and took advantage of an error-filled performance from Federer, who continually put his opponent under pressure only to come up short when it mattered.

In their major 49th duel, Roger Federer beats Novak Djokovic after 72 minutes of play with a 6-4, 6-3 win.
Federer finished second in Group Bjorn Borg, behind Austrian Dominic Thiem, who beat both Federer and Djokovic earlier this week.