Acting Prime Minister Ludovic Orban said Monday night that the Constitutional Court of Romania (CCR) should judge based on the constitutional texts, considering that in his case the latter decided "on the basis of certain political statements". Orban told private TV broadcaster Digi 24 that the members of the CCR are conducting a "political analysis" in his case.

The Constitutional Court of Romania (CCR) ruled on Monday that there is a legal conflict between President Klaus Iohannis and Parliament regarding the appointment of National Liberal Party (PNL) leader Ludovic Orban as prime minister, CCR officials told AGERPRES on Monday.   According to the sources, Iohannis has to make a new nomination for the position of prime minister.

Pro Romania leader Victor Ponta called on his party colleagues "to rely only on themselves" in the electoral battles and to fight for the candidates of the party in the upcoming elections. "I am in Pro Romania and only in Pro Romania will I be, and I rely only on Pro Romania. If I relied on someone else it would mean making the same mistake every time.

Prime Minister Ludovic Orban will be paying a working visit to Brussels, Tuesday through Thursday, and will meet European and NATO officials, according to a Government release.

The Romanian Revolution of December 1989 was the first step made by the Romanians and Romania in what concerns their return to Europe, European Commissioner for Transport Adina Valean told the European Parliament plenary session on Monday, with MEP Traian Basescu added that in December 1989 the Romanians were determined to say "no" to communism, by even scarifying their lives, and they joined t

The Constitutional Court of Romania (CCR) has admitted, on Wednesday, the complaint regarding a legal conflict between the Government and President Klaus Iohannis, establishing that the head of state will issue "at once" the degrees revoking ministers, as well as those appointing interims.

Prime Minister Viorica Dancila reiterated on Thursday, in southwest Mioveni, that she will file a criminal complaint against Victor Ponta after his statement "I will call the masked special ops to remove her from the Government", the PSD leader adding that talking like that about the Romanian prime minister is "a very dangerous thing", which is detrimental "both internally and externally." "His 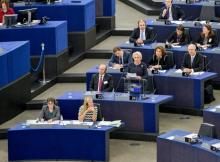 The European Parliament adopted a resolution expressing concern about the rule of law in Romania on Tuesday, the same day as the European Commission released a monitoring report criticising the country for backtracking on the fight against corruption.

More than 10,000 Romanians gathered in Bucharest's Romanian capital to protest against the latest legislative changes passed by parliament, the agencies said. The demonstration route started at the University Square in the Parliament to go to the Ombudsman, the Constitutional Court, and the National Audiovisual Council.