Chair of the National Red Cross Society, Margareta of Romania, has urged people to calm and reason amid an increasing number of cases of infection with the novel coronavirus, pointing out that that together we are a force capable of overcoming this health threat. "We are all disturbed by the rapid spread of this condition, unknown so far.

A member of Saudi Arabia's Council of Allegiance was reportedly arrested in a wave of sweeping dentitions prompted by Crown Prince Mohammed bin Salman, according to an online news outlet.

Hüseyin Sağtan, a jewelry designer from the southeastern province of Diyarbakır, has for many years been designing and producing works for Hollywood productions. Now he creates jewelries for Netflix series "The Witcher" and "Black Sails."

The Custodian of the Romanian Crown Margareta stated on Saturday that, before coming to Romania 30 years ago, she felt like "a person without a shadow," for she didn't feel complete far from her country.

The estate that so enchanted Empress Elisabeth of Austria (1837-98) when she first visited the verdant Ionian island of Corfu is one of the subjects of an exhibition that was recently inaugurated at its Museum of Asian Art.

The Royal Charitable Concert, one of the longest living and most successful fundraising events in Romania, will bring to the stages the Romanian Athenaeum on October 25, soprano Cellia Costea, tenor Teodor Ilincai and the Romanian Youth Orchestra, conducted by Gabriel Bebeselea.

A 37-year-old British woman who had been reported missing on Crete early last week is alive and well, local reports said on Wednesday.

Catherine Mowatt, who had been last seen in the area of Sisi in Lasithi prefecture, was found in the resort of Malia.

The true story of Giannoula Koulourou has been adapted for the stage in an original play written by Theodora Kapralou and directed by Giorgos Papageorgiou. Born in Patra in 1868, the street vendor with a slight mental disability became a laughing stock in her home town for expressing her desire to get married. 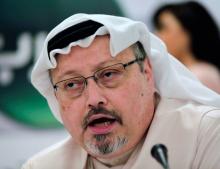 The Senate must push for accountability after U.S. President Donald Trump defied Congress and did not report whether Saudi Crown Prince Mohammed bin Salman was responsible for Jamal Khashoggi's death, according to The Washington Post.