Serbia expects a "friendly price" for Russian gas when the country's current supply deal expires on December 31. But analysts are less certain about the political cost.

Known as Russia's Atlantis, the ancient city of Phanagoria reveals many discoveries, including traces of Turks.

The ancient Greek city of Phanagoria in Taman Peninsula, located in the Krasnodar region in the south of Russia, is estimated to be about 2,500 years old. It was first discovered thanks to a tombstone that washed up in the 18th century. 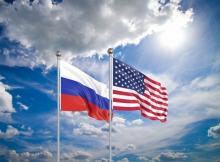 Russian Foreign Ministry spokeswoman Maria Zakharova warned Washington not to interfere in Russia's internal affairs.
"Official Moscow registers U.S. interference in the Duma elections, but it does not make a PR campaign out of it and does not engage in megaphone diplomacy," Zakharova said, TASS reports.

President Vladimir Putin announced on Thursday that dozens of people in his inner circle at the Kremlin had tested positive for coronavirus, AFP reported. Earlier this week, the 68-year-old Putin said he was self-isolating after announcing an outbreak among members of his entourage. "Cases of the coronavirus were detected in my inner circle.

Russian President Vladimir Putin does not rule out that Russia may apply for hosting the Olympic Games, possibly, at some venue in the Far East. However, he remarked that it was too early to discuss such a possibility at this point, because several conditions will have to be met.

The Baltic countries stressed the need for a more cautious approach to this issue.
"It was a very comprehensive and not very easy debate," the German chancellor told reporters after the first day of talks in Brussels, Reuters reports.

Russian President Vladimir Putin warned against provoking his country in his annual State of the Union speech Wednesday, promising a swift retaliation against anyone who crossed Russian's "red lines."

Russian President Vladimir Putin on Monday signed a law allowing him to potentially hold onto power until 2036, a move that formalizes constitutional changes endorsed in a vote last year.

Russian President Vladimir Putin on April 5 signed a law allowing him to potentially hold onto power until 2036, a move that formalizes constitutional changes endorsed in a vote last year.