BIRN's exhibition, entitled Last Despatches, will open in Sarajevo on December 14 at a venue that will from next year host BIRN's regional museum, the Reporters' House, dedicated to journalists and media issues, the wars in the former Yugoslavia and challenges to contemporary journalism.

"What he talked about as a professional sniper was the tactics of sniping, about the weapons that were used, the sniping locations that the Serb forces used - literally behind this museum - and it's a really chilling account of how a professional sniper looks and how obviously these were deliberate attacks on civilians," Lowe said. 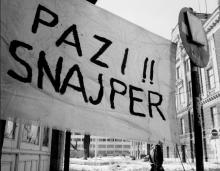 Sarajevo mayor Benjamina Karic, accompanied by the top international official in Bosnia and Herzegovina, High Representative Christian Schmidt, and the vice-president of the Federation entity, Milan Dunovic, unveiled the new memorial on Monday and laid flowers next to the Kazani pit where the remains of those killed in 1992 and 1993 were found.

Turkey sent a plane late on Nov. 12 to help in a search and rescue operation for a Turkish national who went missing during heavy rain in Bosnia and Herzegovina.

"Using donated equipment from Scotland, I set up an improvised dark room and organised photography classes in the orphanage basement. I developed only a few of those photographs back in the late 1990s and they were sitting in my closet gathering dust. Two years ago I finally scanned them using a high resolution scanner and the results were amazing," he said.

The Sarajevo Cantonal Court has sentenced Mustafa Divjan to ten years in prison and Alija Gazibara to two years for crimes against civilians in the Ilidza area during wartime, the court told BIRN.

Divjan was found guilty of killing two Serb civilian prisoners on April 22, 1993 while he was a member of the Bosnian Army's Fourth Motorised Brigade.

The RS is almost wholly economically dependent on Sarajevo, and on increasingly frequent financial transfusions from Belgrade.

"The warning is issued due to the risk of arrest and prosecution in the Republic of Serbia on war crimes charges, and on the basis of previous cases of arrest of Bosnia-Herzegovina's citizens against whom no proceedings are being conducted in Bosnia and Herzegovina or charged by the country's judicial institutions with war crimes," officials from these institutions stated, as Radio Sarajevo rep