Scotland became the first country in the world to provide free menstrual products as part of a global movement against period poverty on Wednesday.

Scotland will become an independent country and then will restore its membership of the European Union. Scotland's First Minister, Nicola Sturgeon, said in a special speech to the European Parliament. She was adamant that the Scottish Government will find a way to hold a new independence referendum.

Two people were arrested for illegal possession and transport of explosives in the town of Malesina in central Greece on Wednesday night as they prepared to go fishing with dynamite.

Four convicts, including a former MP and the ex-chairman of private broadcaster STV were given aggravated life sentences in a case linked to what the authorities call the Fethullahist Terrorist Organization (FETÖ). Anadolu Agency reported on June 8.

Police in Scotland were a little red-faced after it emerged that officers had a stand-off with a giant stuffed tiger for nearly 45 minutes.

UK Cop Humour posted photos of the giant plush toy on Facebook, noting that after photos were sent to the station, "numerous units, including three ARV's and a dog handler, [were] sent to the farm to tackle this beast."

When Dolly the sheep was put down before her 7th birthday in 2003, she was said to suffer from age-related osteoarthritis, raising red flags that clones may grow old faster. But scientists said Nov. 23 that the fear of premature, clone-related ageing appears to have been misplaced. Dolly's joint disease was, in fact, quite normal. 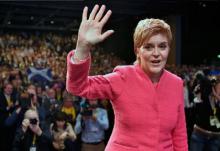 Scotland's first minister, Nicola Sturgeon, said the British government should make changes to its law on leaving the European Union before the Edinburgh government adopts it, Reuters reported.

The identity of a female officer accused of having sex on board a nuclear-armed submarine has been revealed.
HMS Vigilant was submerged in the North Atlantic when reports of two high-ranking submarine officials having sexual relations with two different women emerged – something which is forbidden between serving personnel on the same vessel.

Rough Guide readers voted Scotland the most stunning place on the planet, edging out Canada and New Zealand to take the top spot, The Sun reports.
The listing asks: “Who can deny that these wild beaches, deep lochs and craggy castles are some of the most wonderful and beautiful sights in the world?”