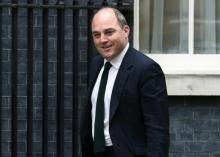 MOSCOW (Reuters) - Russia accused Britain's Royal Air Force (RAF) of intercepting its military aircraft over the Black Sea in a dangerous fashion designed to provoke Moscow after the RAF made two such interceptions in a single week.

In London, three passers-by were hospitalized in the hospital after being doused unknown "toxic substance".

As reported BBC citing the police, the three victims, 17, 22 and 27 years found on the street in the Kingsland area of Hackney in North East London and taken to a hospital.

President Aleksandar Vucic said this in an interview for Rossiya-24 broadcaster, Sputnik is reporting on Friday.

Yulia Skripal, who was poisoned in Britain last month along with her father, a former Russian spy, has said she did not wish to take up the offer of assistance from the Russian embassy in London.

Yulia Skripal has been discharged from hospital more than a month since she was poisoned along with her father, a former Russian spy, with a military-grade nerve agent, the English hospital where they are being treated said.

Yulia Skripal has been discharged from a British hospital, the BBC reported on Tuesday, just over a month after being poisoned with a nerve agent along with her father Sergei, a former Russian double agent, quoted by Reuters.

Britain is considering offering poisoned Russian ex-spy Sergei Skripal and his daughter Yulia new identities and a fresh life in the United States in an attempt to protect them from further murder attempts, the Sunday Times newspaper reported.

New Zealand could become the Skripals new home although the US is the more likely destination.

Britain is considering offering poisoned Russian ex-spy Sergei Skripal and his daughter Yulia new identities and a fresh life in the US in an attempt to protect them from further murder attempts.

The pets of former Russian spy Sergei Skripal, who was poisoned in the UK, are dead, a spokeswoman for the British Environment Ministry said.

She told the agency that when given access to Skripal's home, a vet discovered his two dead guinea pigs. A cat has been found in a severe condition and a vet surgeon has decided to euthanize her to put an end to her troubles.