The new Dacia Logan Stepway model was released today by Automobile Dacia on the online sales platform of the company vanzari.dacia.ro. Starting in December the model will be available at all Dacia dealerships in Romania, Dacia Automobile reported on Thursday. The model is available in 3 engine variants: TCe 90 (petrol), Blue dCi 75 (diesel) and Blue dCi 95 (diesel).

German automaker Volkswagen may decide to produce one of its best-selling models - the Passat in Slovakia instead of Turkey, the automotive news agency reported.

The giant Tesla plant, which was built in less than ten months, began test production ahead of schedule, the automaker said this week.

According to the announcement, complete vehicles are now being manufactured on a temporary basis, from the bodywork, to painting and assembly. The plant is about 65% cheaper than those in the US producing Model 3.

For the first time in Turkey, aluminum engine blocks will be manufactured at Renault, making it the only hybrid engine production facility in Europe, said the country's industry and technology minister on Oct. 23.

Romania is on the short list of countries where Volkswagen may open a new factory for the next generations of Volkswagen Passat and Skoda Superb, and discussions in this regard have already been initiated by the Bucharest government, Ziarul Financiar, a financial daily, reported today.

US carmaker Ford is starting on Tuesday in Craiova the production of its new compact crossover Puma, the first hybrid vehicle built in Romania, on an investment of 200 million euros, the company informed in a release.

Turkish carmaker Tofaş produced its six millionth automobile, a sedan model of the Fiat Egea family, it announced on July 29.

You need Rolls-Royce, but do not want to pay between $ 500,000 and $ 730,000 for a brand new Ghost? There is a solution. The official importer of BMW and MINI in Bulgaria "M-Car Sofia" offers a used one at a much lower price. Since last year, the representative has also served as Rolls-Royce official service in Bulgaria, reports money.bg 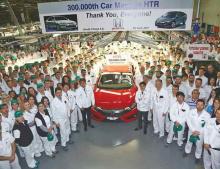 Honda has decided to end car production in Turkey following completion of the production of its current Civic Sedan model in 2021, the company said in a statement on April 8. 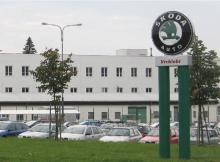 The new Volkswagen Factory in East Europe, which will produce Skoda cars, will have an annual capacity of 350,000 cars. This is clear from the statement of Chief Executive Officer of the Skoda subsidiary, Bernhard Meyer.