The prospect that the first party may not garner an absolute parliamentary majority has preoccupied pundits and analysts for weeks, with most focusing on the possibility of a coalition government between New Democracy and the centre-left Movement for Change.

Prime Minister Alexis Tsipras said on Tuesday that he will introduce an amendment before Parliament is dissolved to revoke a planned reduction in the tax-free threshold and that he will ask Greek President Prokopis Pavlopoulos to set in motion on June 10 the process for early general elections. 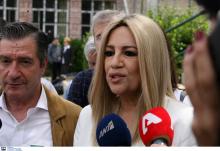 The head of the center-left Movement for Change alliance, which saw its popularity grow in Sunday's polls for European Parliament and regional and local elections, called on Prime Minister Alexis Tsipras to call early elections in the wake of his ruling SYRIZA party's defeat.

The exit poll was conducted by a consortium of Greek polling companies comprised of Alco, Marc, Metron Analysis and MRB. It was released at 7pm Greek time, two hours before the polls closed.

Main opposition New Democracy is 6.3 percentage points ahead of ruling SYRIZA, according to an opinion poll carried out by ALCO for broadcaster Open and published on Monday.
The poll found that ND would garner 29.9 percent of the vote if snap polls were held now compared to 23.6 percent for SYRIZA, with socialist KINAL and neo-Nazi Golden Dawn both coming in third with 5.7 percent.

The results of the European Parliament elections due to take place on Sunday are expected to have a pivotal impact on the strategies of the country's political parties in view of national polls later in the year.

The government handily won a confidence vote this evening (153-136) after a three-day debate which was characterised by ad hominem and vitriolic exchanges between Prime Minister Alexis Tsipras and main opposition New Democracy leader Kyriakos Mitsotakis.

New Democracy leads SYRIZA by 6.5 percentage points (by extrapolation after excluding those who will abstain or cast spoilt ballots and apportioning the undecided voters proportionately to the parties decided respondents will vote for) - compared to a 6.2 percentage-point spread in December - in a new survey released today and conducted by the Alco polling company for private Open television.

The New Democracy party has a 5.5 point lead over SYRIZA according to a survey of voter intentions by the Prorata polling company published in the leftist Efimerida ton Syntakton newspaper on Saturday.

The conservative opposition received 30 percent against 24.5 percent for the ruling leftist party.