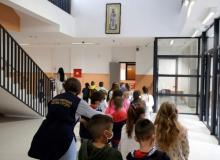 The Prime Minister of Serbia Ana Brnabi, the President of the Assembly Ivica Daci and the First Deputy Prime Minister and Minister of Education, Science and Technological Development Branko Rui will address the academy.
The feast of Saint Sava was established as the school's feast day in 1840, and it is also celebrated by the Serbian Orthodox Church and the faithful.

Ivica Dacic told TV Pink that he would not do that because he would not like to jeopardize the possibility of the incumbent president, Aleksandar Vui, winning in the first round of elections.

Vui arrived at the Guard House, where he was greeted by the Guard of Honor of the Serbian Armed Forces.
The meeting was also attended by the Minister of Defense Nebojsa Stefanovic, as well as the Chief of the General Staff of the Serbian Army, General Milan Mojsilovic.

She is currently in the Emergency Center, said today in the Palace of Serbia the state secretary in that ministry, Stana Boovi.
Due to that, the Minister did not participate in the work of the socio-economic council today.

Namely, as he stated, Blinken has already shown that he chose the side and that is why he has no credibility.
"I am someone who was applauded and criticized by both sides (Serbs and Albanians). I am very pleased with the progress we have made. I have supporters and slanderers on both sides," Grenell told Pavlovic Today.

In a bid to push the governments of Serbia and Kosovo to renew the stalled EU-facilitated dialogue on normalisation of relations, 47 civil society organisations, CSOs, from both countries on Friday urged them to make more of an effort, expressing "deep concern" about a "deteriorating situation on the ground".

Vucic stated that there is no need for him to be at the head of the SNS anymore, because they have been tired of him in the previous 10 years.
He also referred to the Law on Expropriation.