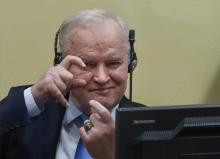 The Appeals Chamber upheld Ratko Mladic's first-instance verdict in its entirety.
He was sentenced to life in prison for genocide in Srebrenica, crimes against humanity in 15 municipalities in Bosnia and Herzegovina, siege, sniping and terrorizing Sarajevo from 1992 to 1995, and holding members of the UN peacekeeping mission hostage during the NATO bombing.

You can follow the broadcast on B92.net.
As a reminder, by the first-instance verdict of the Hague Tribunal, whose work was inherited by the Mechanism, Mladic was sentenced to life imprisonment in November 2017, after which both the defense and the prosecution appealed the decision.

Prosecutor Serge Brammertz told BIRN in an interview ahead of Ratko Mladic's trial verdict on Tuesday that he believes the crimes by Bosnian Serb forces committed in five Bosnian municipalities in 1992 represented the beginning of a genocide  in the country which culminated in Srebrenica in July 1995.

New photographs from the sites of detention camps and locations of mass killings during the Bosnian war form part of a photo essay published by BIRN on Monday, a day before the final verdict in Ratko Mladic's trial at the UN court in The Hague.