The Istanbul Domestic Relations Court has dissolved the marriage of a couple, saying the union could not continue in part due to the husband's negligence that resulted in "economic violence."

Akbay also drew attention to the lack of attention in academic research in the field, which made making such estimates more difficult.

A total of 35 women were killed in September and 44 others were subjected to sexual violence, according to a report released by the Kadın Cinayetlerini Durduracağız Platformu, a women's rights activist organization that keeps track of violence against women.

Police released on Wednesday pictures of the four men who were systematically prostituting a 14-year-old girl in the city of Larisa. 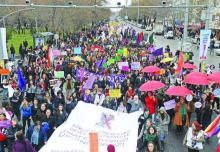 Some 86 percent of women in a recent study by Turkey's Ministry of Family and Social Policies said they have been subjected to physical or psychological violence by their partners or family, and pursued legal proceedings in the aftermath, revealing the prevalence of violence against women across the country.

A Silicon Valley tech titan has been sued for $40 million by a woman who claims he used her as a sex slave for 13 years.

Michael Goguen, who had worked for a firm that funded Google and Paypal, had been “sexually and physically” abusing Amber Laurel Baptiste over more than 13 years after meeting her at a strip club in Texas, her lawsuit alleges.

In an interview to a BBC 3 reporter on the channel’s series ‘Sex in Strange Places’ a Turkish prostitute revealed how women were treated in Turkish society and the lack of sexual education within the Turkey. One of the prostitutes explains to the reporter how she taught men how to have intercourse correctly to stop them from harming their wives.