New Zealand has passed a landmark bill that treats abortion as a health issue rather than a crime, a major reform in laws that have been unchanged for more than four decades.

The reform passed through parliament late on Wednesday by a vote of 68 to 51.

Professor Ayşe Akın received a United Nations Population Fund (UNFPA) award last week in Nairobi, Kenya at the International Conference on Population and Development (ICDP25) for her contribution to the health of women at the global and national levels since 1994, when the first ICDP took place in Cairo, which she had also attended.

The International Conference on Population and Development (ICPD25) started on Nov. 12 in Nairobi under the shadow of the diverging views of the conservative and liberal governments on sexual and reproductive health.

Abortions and same-sex marriage became legal in Northern Ireland. In the rest of the United Kingdom, termination of pregnancy has been permitted since 1967. In Northern Ireland, abortions were only allowed when the mother's life was endangered.

Marriages between two people of the same sex were also legal everywhere else in the kingdom except in Northern Ireland.

Tens of thousands protested in Paris against a new law on in vitro fertilization. It will give women under the age of 43 access to state-funded procedures, regardless of their marital status and sexual orientation. Currently, only heterosexual couples have access to the procedures.

A 74-year-old Indian gave birth to twins after artificial insemination. Erramatti Mangayamma is a resident of Andhra Pradesh.

Just for the first three months of 2019, 5,800 abortions were committed in Bulgaria, making the country among the leading countries in Europe by abortion. This is a statistic of the National Center for Public Health and Analyses (NCPHA). Of these, over 3600 pregnancies were ended of patients' own free will.

Organisers said they wanted to stage a peaceful walk with a goal of "protecting the lives of unborn children - the most vulnerable minority in Croatia and providing support to every pregnant woman".

A handout image made available by the Spanish company Embryotools shows the birth of a baby with DNA from three people that was conceived using an experimental in vitro fertilization (IVF) method called mitochondrial donation, in Athens on Wednesday (photo released Thursday). The method is only believed to have been used once before. 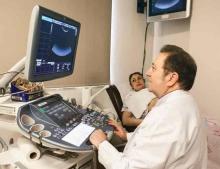 Turkey has become a popular destination for foreigners pursuing in vitro fertilization treatment (IVF) with its successful clinics and cheap prices, according to a professor of gynecology and obstetrics.